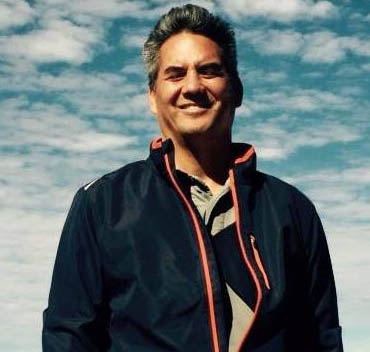 Artist, Activist, and Entrepreneur, Fred co-founded Man Up Campaign in 2009.  He served as Director of Technology, and now as Executive Director since 2015.

As Executive Director, he vows to continue to activate and encourage the global youth of all gender to end gender-based violence by actively supporting the movement for gender equality, inclusiveness, and opportunity and addressing the root causes of gender-based violence. He believes a change in the outcomes for women & girls globally will change the world for the better as no other cause that one can make. In his personal life and most important role, father of a daughter, a leader and mentor of youth, and advocate for over 26 years in the areas of social justice and non-violence, he views this vow as a personal and daily responsibility. Fred has worked with NGO's on initiatives for peace, gender, youth leadership, environment, application, and access to technology and non-violence issues. He had the fortune to information architect and developed the website for The Coalition for the International Criminal Court.  Secretary-General of the United Nations Kofi Annan attributed the website as one of the key factors that facilitated the International Criminal Court Treaty after 100 years of effort. Fred has also worked with other NGOs, including the Hague Appeal for Peace, the People's Millennium Assembly at the UN, and the preparation conferences on Rio +20. Recently on activities at the UN include a key role in creating official establishing youth participation in CSW with 2016, 2017 Youth Forums and inclusion in the Final Conclusions, and in following youth dialogues.

Gaining Man Up Campaign special Consultative Status with UN ECOSOC has been an opportunity to build a strong youth presence with Man Up Campaign leaders and youth leaders from partner organizations participating in many of the meetings, speaking and acting in drafting recommendations in many key UN Meetings. The CSW, ECOSOC Forum, The High-Level Political Forums, and the NGO Major Groups, The General Assembly, The Ocean Conference in 2017, and the BBNJ. The Secretary-Generals Climate Conference 2019 Currently serves on the NGO Task Force to Ratify ILO 190 to end sexual harassment and gender-based violence in the world of work. He feels it is essential for us all to engage in the Real Challenge of accomplishing the 2030 SDGs. He also is a World Ocean Council Associate working on toward a sustainable ocean and coastal regions.

Fred founded many ventures, including LiQ, a technology company, eventually sold to a publicly-traded company. His agency NetReaction created Pihana Pacific's web portal, online marketing, and brand strategy, which helped realize Pihana's successful merger as equals with Equinix and i-STT. Besides development and management consulting with technology start-ups, he has done projects for Fortune 500 and Global 1000 companies such as Hugo Boss, Trammell Crow, Sumitomo Corporation, Sony and NTT DOCOMO, and many other commercial and social ventures.

Fred's talents in business and technology balanced with an extensive background in sports and arts. He was a pioneer participant in soccer as a teen in Des Moines, Ia, as well in football, wrestling, and track. He has danced for over two decades, studying and performing modern and classical dance with mentors such as Maggie Black and Merce Cunningham. You may still find him choreographing, performing on stage, dancing the Argentine tango, or teaching a class, lately, on the figure skates gliding or jumping to supporting his daughter in her favorite sport or New York Ice Theater.

He has a real passion for and trust in the potential of youth leaders to solve the challenges of today and the future.